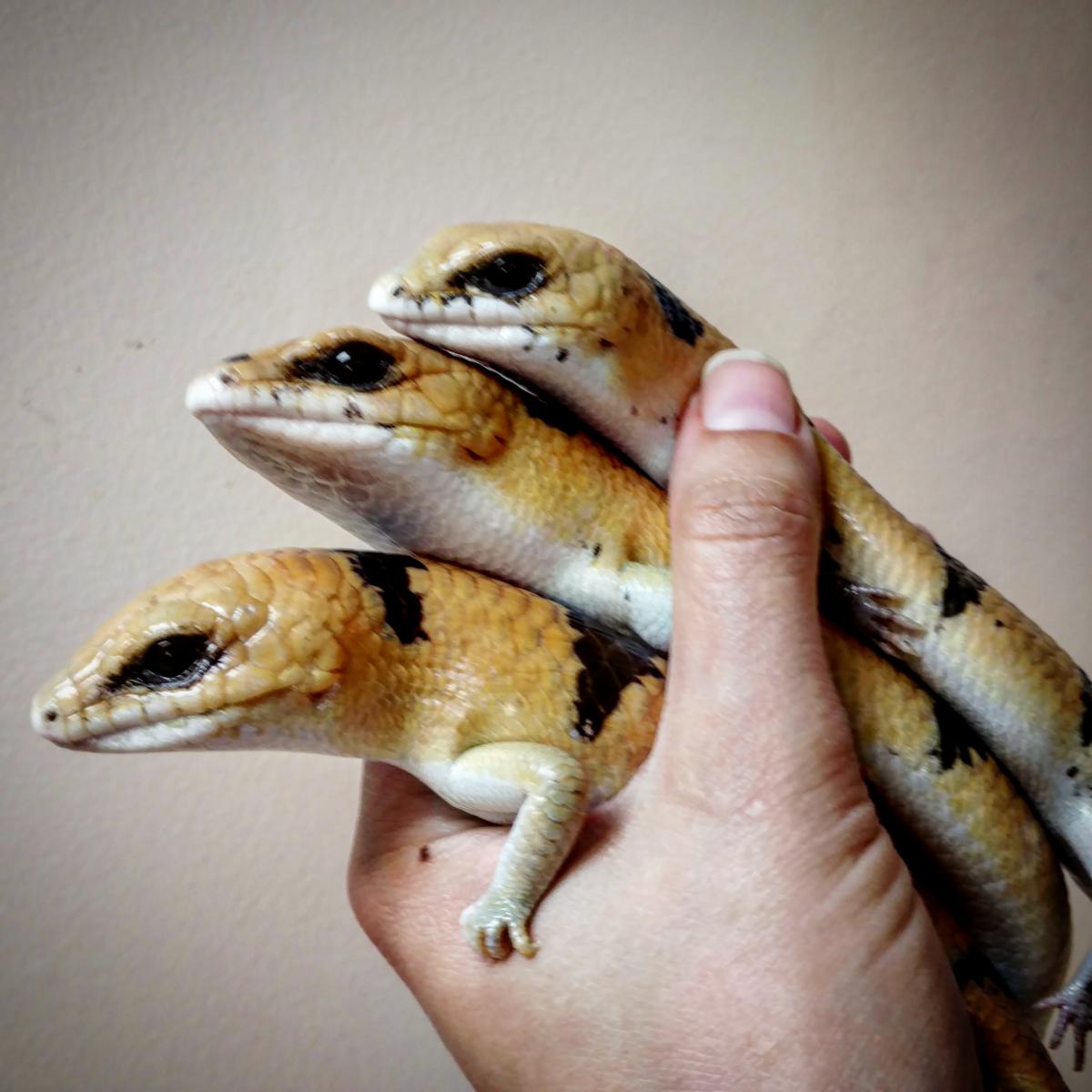 Peter's banded skinks are uncommon in the reptile hobby. These inquisitive skinks, about the size of a leopard gecko, can make great pets with the right care. They tend to become quite tame and will often beg their owner's for treats. Peter's banded skinks, Scincopus fasciatus, are a monotypic species of the Genus Scincopus which are recognized by their squat bodies, robust limbs, short tails and orange/yellow and black dorsal banding patterns. This species has two described subspecies, S. f. fasciatus  and S. f. melanocephalus. The former being described possessing distinct dark transverse blank bands with little to no black on the head while the latter is described as having an almost completely black head and far less distinct black banding. Most captive specimens can be presumed to be of the S. f. fasciatus subspecies based on morphologic appearance. These nocturnal lizards are native to the Sahelian and southern Saharan regions of northern Africa. These sandy regions are extremely arid with limited annual rainfall. Average high temperatures within these regions range from 24 to 42°C (81-108°F) with coolest temperatures dropping as low as 15°C (90°F). Similar environmental conditions should be provided in captivity. Little data is available concerning the natural diet of Scincopus fasciatus. They are believed to be primarily insectivorous, but may consume some plant material. A variety of commercially available insects should be offered along with small amounts of fruits, flowers, and vegetables. The diet should be supplemented with vitamins and minerals. This species UVB lighting requirements are also unknown. Providing this lighting should be strongly encouraged given recent studies have demonstrated benefit in another nocturnal lizard, the leopard gecko (Eublepharis macularius).

An adult needs a cage at least 18 inches long, 10 inches wide, and 12 inches tall (about the size of a 10 gallon aquarium). Mostly peaceful, they can be housed in small groups given additional room. However, accidental injury can occur when one mistakes another's tail ot leg as a prey item.

Cage furnishings need not be elaborate as they will spend a great deal of time hiding under the substrate. However, they appear to enjoy using hide boxes and exploring over rocks and ledges.

While UVB lighting requirements have not been determined yet for this species, until more is known it is a good idea to provide it. We recommend a 5.0 fluorescent UVB bulb with a 12-14 hour light cycle.

Diet should consist of crickets, Zopobas worms, dubia roaches, and giant mealworms every 2-3 days. They also appear to relish Repashy Superfoods Grub Pie gel diet as well and this can be easily incorporated into the diet. Small amounts of fruits can also be offered. Prey items should be dusted twice weekly with Zoo Med ReptiCal without D3 and once weekly with Zoo Med Reptivite with D3.

Information on how to accurately sex this species is often contradictory and confusing. Female specimens possess large cloacal glands that can protrude and be mistaken for hemipenes when "popping" specimens. Males tend to have larger, wider heads. But this isn't a hard fast rule. The most accurate way to sex this species is by using contrast radiography to identify hemipenes, similar to what has been found in Blue Tongue Skinks and Shingleback Skinks.

Peter's banded skinks have yet to be bred in captivity, so all captive specimens are wild caught and because of this often carry a large number of internal parasites. Most commonly Coccidia (Eimeria sp) and hookworms. Flagellates such as Trichomnoas species have also been found. We recommend all new animals have a fecal parasite screening on a freshly passed fecal sample.

Once parasites have been eliminated and these skinks become acclimated to captivity they seem relatively hardy and illness is rarely noted.

Supplies for your Reptiles and Amphibians

Did you know Colorado Exotics carries a complete line of products for your turtles and tortoises, geckos, iguanas and other reptiles? Check out our reptile and amphibian supplies here.

Schedule an appointment online now and make sure your pet is as healthy as can be.